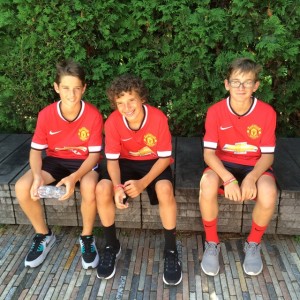 What happens when unaccompanied minors travel from Granada, Spain to live with you for three weeks during summer? They become family.

Unaccompanied minors is a special service some airlines have for children who are flying alone. Our sleepy unaccompanied minors arrived around midnight July 12th from Granada, Spain. A few hours later, 13 year-old twins Javi and Manu didn’t miss a beat as they rolled out of bed and piled into the car to cheer on James and his team at a soccer game.

Later that evening, I took the boys to Target. Walking through the cereal aisle, Javi (short for Javier) looked around wide-eyed and exclaimed: “You have so many choices!”

Welcome to America – the land of abundance!

From sugary-sweet cereals to potato chip flavors, we have something for everyone.  The boys chose Cocoa Krispies, Captain Crunch, and classic Pringles, among other snack foods they were hankering for. However, this wasn’t their first trip to America – the boys stayed with another (awesome) family last year for an international soccer camp exchange arranged by AddSoccer. They had already discovered Slim Jims and were pleased to see we had their favorite spread: Nutella – a staple in Spain, which they spread on waffles, toast, pretzels and just about anything.

During last summer’s camp, James became friends with Javi and Manu (short for Manuel). And they invited him to stay at their home during our visit to Granada, Spain last February.

Javi and Manu had no trouble falling into sync with our family of three plus two dogs. They enjoyed eating, snacking, playing soccer, football, tennis, mini-golf, and hide and seek, swimming and shopping.

“Do you have a spending limit?” asked my husband Rob.

Rob laughed so hard he couldn’t respond to try and ask the question differently. Something may have been lost in translation, however, the boys caught on quickly. Later, we learned they brought money to spend on anything they wished to buy–and they were determined to spend it all. They had a reserve stash for family gifts, too. So we helped them spend their money in Rochester and Chicago.

We drove 600 miles to see Manchester United F.C. and Paris Saint-Germain F.C. play at Soldier Field in Chicago on Wednesday, July 29 for the 2015 International Champions Cup North America presented by Guinness. (Special thanks to our friend and wingman Anthony).

Unfortunately, our team – ManU lost to PSG, but we had an unforgettable time. Attending the game and staying with our Chicago-area friends was the highlight of our summer. Some of my favorite memories are:

+ trying to paddle a pontoon boat that only went in circles

+ eating chips and sandwiches in the middle of a lake we couldn’t swim in because of high levels of E.Coli

+ riding bicycles around Libertyville, which is conveniently located between Chicago and Milwaukee just west of Interstate 94

+ shopping the outlets in Wisconsin

+ seeing the bean, the head and the gardens at Millennium Park

+ hearing a little boy ask his mom: “Why are those kids wearing Chevy costumes?” (Chevrolet is Manchester United’s sponsor and its logo is emblazoned across the front of the jersey, indeed resembling a costume).

+ driving in Chicago traffic at 5 p.m. (not recommended!) 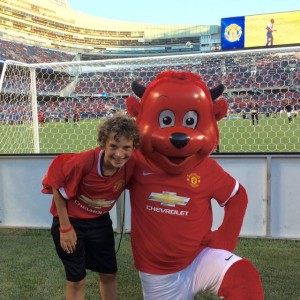 Our 20-plus hour road trip was uneventful. I guess traveling with teenage boys is a breeze when your connected with wi-fi!