You are here: Home / Lessons / Minding Soccer in May 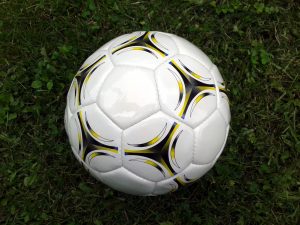 Soccer is meant to be played outdoors in May not winter.

Writing this at 10:50 a.m., I am standing outside bundled from head to toe in winter gear watching my son’s soccer game. I am barely recognizable on this frigid May day disguised as winter. My Weather app reads cloudy with a chance of freezing rain. A bone-chilling wind and spate of icy rain incites tears and I retreat to my car.

I can watch the game from the warmth of my tank; feeling my face and wiggling my fingers once again. An occasional swipe of my wiper blades clears the windshield so I can view the soccer game. This game, however, is not going well for my son’s team.

I am having difficulty minding this game.

It’s interesting that I could not stay focused today. Perhaps the boys on my son’s soccer team lost focus, too. Outside forces throttled us, killing everyone’s “ginga,” which is the Portuguese word for “sway” which is the word used to describe the flowing creativity of Brazilian soccer star Pelé.  In the new documentary: “Pelé – Birth of a Legend” ginga is what Pelé harnessed to win the World Cup for Brazil in 1958, 1962 and 1970.

I watched the movie last night with my family. No five star film, it is nonetheless a charming story of the revolutionary impact that a poor, 17 year-old Brazilian kid had on “the beautiful game.”

According to the documentary, ginga has roots in Brazilian martial arts and dance, but was looked down upon as a primitive style of soccer play that had no place among the pros. A national Brazilian treasure, Pelé brought ginga back to soccer and is credited in America with putting soccer on the map when he joined the New York Cosmos in 1975.

One of the moments in the film that resonated with me was when Pelé’s father, a janitor and former soccer phenom tells his son not to lose focus because when you do, you also lose confidence.

Perhaps, I was minding soccer after all.