You are here: Home / Lessons / Waiting for news 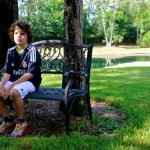 Waiting is nerve wracking, especially when waiting for news about someone you love. We wait for lots of things in life from a good cup of coffee, to a hot meal, to pulling the brownies out of the oven. However, waiting for anything health-related is worrisome. For more than three hours on Friday, October 12th, I waited at the hospital for my husband Rob to get out of surgery. (He underwent hip resurfacing to eliminate chronic pain from the hip joint.)

While waiting, I shuffled around the main floor with my hospital-issued pager looking for a comfortable spot to sit and read or do some work. I had planned for waiting, but at the same time you can’t plan for waiting. I drank lots of water, made multiple trips to the bathroom, blew my nose, and used lots of gratuitous hand sanitizer from kiosks stationed like vending machines around the hospital. I wondered how many people caught icky diseases from hospitals like MRSA, staph infections, and the flu. I also worried about Rob in surgery: Would there be any complications, allergic reactions, or worse? But no – none of my wild imaginings would happen. I noticed that my throat felt scratchy as I eavesdropped on conversations. A couple talked about their elderly mother who fell and fractured her hip. They were waiting for her to come out of surgery and they were discussing plans to move her to a nursing home because she couldn’t live on her own, anymore.

As I hunkered down in my corner sipping a terrible cup of coffee, it was hard to focus on anything, but the present. Hospital staff came in and out of the coffee shop to order lattes and share conversations. I realized that I had to trust these people who I didn’t know. I had to trust that the doctors and nurses would do the right thing by Rob. I took some comfort in the messages that buzzed in from friends and family. As I pecked updates in texts and emails, I sent a special message to James at school. He had been very worried about his Dad the night before. He had no idea what to expect and it was scary for him to know his Dad was in the hospital getting “fixed up.” Will it hurt? Will he be okay? When will he come home? When will he be able to do things again?

At 11:30 am, my pager buzzed. One of the very nice hospital volunteers handed me a phone and I spoke to the doctor. The surgery went well – no problems. What a relief! But I couldn’t see him, yet. I would have to wait another hour, or so until he woke up and was wheeled into his room from recovery.

As rocker Tom Petty puts it: “The waiting is the hardest part.”

Previous Post: « Practice Driving Aware Not Distracted
Next Post: An intimate look at The Nutcracker Ballet for Rochester Woman Magazine »