You are here: Home / Lessons / Finding karma in the queue for blood 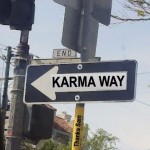 I’m standing in the middle of a queue to get my blood 7:20 in the morning, which is not a place you’d expect to find karma. The doors to the medical lab collection office are not yet open. An elderly man walks in behind a lab technician who unlocks the door and closes it behind her. He’s left standing in front of the door, and then turns and speaks to the guy behind him. Says that he’s been waiting since half past six, but the doors were locked.

“You people,” he says, looking accusingly at the rest of us in the hallway, “sneak in from another door.”

I chuckled. No, I think to myself. We walked in through the front door to the building, which opens at 7:15. Why the heck would anyone arrive a full hour before the lab opens? Unless, of course, they’re retired.

“Are you trying to be first?” The man says to a woman who had inched closer to the office door. “I expect to be the G*d D**n first person in line since I was here at 6:30!”

Sheesh! I look up from my place against the wall and stare at the guy, my adrenaline pumping. Who does this guy think he is? He’s not the first, last, or only person to wait for a door that won’t be unlocked until staff arrives. He’s not entitled to leap to the front of the line because he made a mistake. He has no right to yell at anyone.

Breathe in. Steady. Let it out slowly.

This situation feels a lot like road rage during Monday drive-time. You know the feeling when you want to flip the bird to someone who just cut you off, or curse the person who decides to put on her left turn signal at the last second when the light turns yellow and you’re planning to go straight.

Stay calm, I remind myself. Don’t do anything stupid. Don’t react. This guy’s having a bad day. He’s angry at himself, and chooses to direct it towards everyone around him.I  should respond with discipline, self-control, and mindfulness. I should let go of my attachment to the situation.

Perhaps it helped that I planned for the morning of standing in a line, waiting for my blood to be drawn for a lipid panel. I fasted for 12 hours, woke up, stretched, and took Beck for a walk in the scorched park. The air was thick and still. The only sound I heard was Beck’s rhythmic panting. The sun was beautiful – a brilliant, red ball of fire hanging in the sky. God knows we could all use a bit of cool and touch of water in the midst of this heat wave.

Some say that anger is like a raging fire fueled by thoughts and feelings. Without fuel, however, the fire dies.

Initially, I felt a spike in adrenaline. Why am I angry with him? Yes, I want to get in and out of that lab as soon as possible. There’s always a wait and it’s not the place I want to hang out. But what would I gain by saying anything to this guy? Anger is impermanent, empty and doesn’t last. It’s an emotion that’s always with us. It protects us in certain situations. In other situations, it needs to be managed.

The doors open and we all shuffle in. The angry man is first to sign in on the clipboard, I am sixth. After looking up his information in the system, the technician says to him, “It says here that your doctor doesn’t want you to have blood drawn until August 12th.” The guy stands at the window for a moment as the technician repeats herself. He thanks her and leaves.

Karma? Perhaps. We can’t control the situations we find ourselves in, but we can control our responses to those situations. I couldn’t help but smile and continue to wait in the queue for blood.