You are here: Home / Life / Eleven Years Ago Today 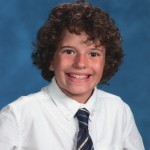 Eleven years ago today I gave birth to a beautiful boy. Neither Rob nor I appreciated just how the changes in our lives would affect us. We caught a ride on a roller coaster without brakes: the anticipation of giving birth and the irrepressible joy of holding our newborn son, collided head to head with the anguish of losing our beloved dog, Gunnar.

The day that James Ray Bruneau arrived kicking and screaming into our lives was long and exhausting. Rob and I waited thirty-eight weeks – plus an extra six-and-a-half hours pacing the hospital floor before a scheduled C-section – for our six-pound, five-ounce, twenty-inch bundle of joy.

Rob exclaimed, “He looks just like a little man!”

When I caught a glimpse of him in the doctor’s hands as he held him high above my eviscerated belly, I said, “He has a lot of hair!”

Indeed, Baby James had a pelt of dark hair that made him look eerily like Eddie Munster. (To our great relief, it fell out a few weeks later and James remained bald during his first year.)

Looking in my little boy’s eyes, my dream had come true. While I was pregnant, I had a remarkably vivid dream of a little boy picking flowers. The bright sun illuminated his golden wisps of hair and fair skin. I thought he looked like an angel, but I was sure that he was my son.

After the nurses cleaned and swaddled James, Rob held him near me. Neither of us could stop smiling as we looked at James then each other, again and again. But everything wasn’t perfect.

Earlier that morning, our 6-year-old boxer Gunnar had collapsed in the street minutes after a brisk run in the snow-covered, frozen hills of our neighborhood. As Rob rushed him to the vet’s, I took a shower, oblivious to what was taking place.

I wasn’t worried about Gunnar, nor Ruby, – our 11-month-old boxer whom we decided to get when we had trouble getting pregnant (but that’s another story). We had planned and prepped for our baby’s homecoming with both dogs. We bought a plastic baby that would cry when you pressed her belly. Our dog trainer Melissa recommended this so both dogs could get used to hearing a wailing baby. The first time the doll cried, Gunnar trampled Ruby in his rush to be the first to investigate. Both dogs arrived in the nursery with furrowed brows. They rose on their hind legs; four paws pressed against the crib to peer inside.

We also used a training collar for Gunnar that allowed us to buzz him with a remote whenever he rushed the front door at the sound of the doorbell. He had this annoying habit of plastering his black, wet nose on the side window while barking, spitting, and clawing his way up the wall. Zapping him in the neck (just a little) worked like a charm.

Gunnar was my first dog – not counting my parents dog, Dolly, when I was a baby. Growing up I had pets – rabbits, gerbils, and cats. After the rabbits and gerbils died, the cats lived. Cats were independent – they came and went as they pleased – and used the litter box. A dog required work – walks, training, and picking up poop. It took more than a year for Rob to coax me into getting a dog. However, one visit to see a floppy-eared, brindle-colored puppy, and I was smitten. We brought the pup home and raised him like our baby. We bathed, fed, walked, watered, and spoiled him until he grew to nearly 90 pounds. We enrolled him in doggy obedience classes, which proved especially helpful when he decided to walk me! Regardless, Gunnar was a constant comfort, especially when Rob traveled. He was my protector, my companion, and my friend.

Rob and I had done all we could to prepare both Gunnar and Ruby. And so, on the morning of January 9th, 2002, I was focused on having a baby who was in the wrong position. I scheduled a C-section two days before my good friend Susan was scheduled (yes, she was mad at me, but she eventually forgave me).

I was anxious about the surgery. Ironically, the only birthing coach session Rob attended with me was what to expect with a cesarian. We didn’t pay attention since we had no reason to believe we’d have anything other than a natural birth. An ultrasound in my 35th week, however, revealed the baby was breech. No amount of coaxing turned baby around.

When baby James entered the world at 7:47 p.m. on January 9th, Gunnar was gone.

I believe things happen for a reason that sometimes lies beyond our comprehension. I believe that Gunnar watches over James, and that maybe – just maybe – Gunnar lives in James. 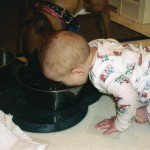