You are here: Home / Lessons / How to attract a leprechaun with success 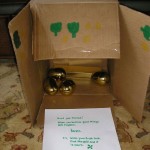 For the past few years, James has been trying to catch a leprechaun. I’m not sure what sparked the idea, but once he got it into his head, he imagined himself with a lucky, little Irish buddy. First, James ransacked the basement for a cardboard box. Next, he decorated the box with a green Sharpie. And then he asked me for some gold objects. Since I wasn’t about to part with anything of value, I offered him a shoe.

“You know,” I said, “Legend has it that if you place an old shoe in the box to attract the leprechaun, he’ll come.”

My kid wasn’t buying it. Who’d want a stinky old shoe? Instead, James settled on leaving a few gold-colored plastic eggs and small gift boxes. James felt that leprechauns would be attracted to great packaging and shiny objects, but he also attracted our dog, who was very interested in pawing and pouncing on the gold, plastic, eggs. Lastly, James wrote a heartfelt note and put the entire contraption in our sun room.

On St. Patrick’s Day morning James raced to the overturned box. Instead of finding an odd-looking, little man, he found five gold dollar coins, and a few lucky, pocket charms. At first he was disappointed, but after he read the leprechaun’s note, he smiled.

To be a great friend, you don’t have to tell the funniest jokes or write the most clever stories. You don’t have to be perfect in math or soccer. You just have to be there when your friends and family need you the most. That’s what love is all about.

“I’m going to write to the leprechaun again next year,” said James. “He’s my friend, and maybe he’ll bring me a soccer jersey.”

Leprechauns, like success can’t be trapped, but they can be attracted. Ironically, it’s not about luck at all. Here are a few lessons I learned from James’ desire to catch a leprechaun.

1 – Don’t give up trying to attract a leprechaun. Imagination, creativity, ingenuity, persistence, and patience pays off.

2 – Leprechauns can’t be trapped, but they can be attracted by a kind heart, good character, and a few shiny objects.

3 – Leprechauns can be great friends. They will look out for you, even when you can’t see them.

4 – It’s good to believe in leprechauns, even when others don’t.

Are you looking for me? What I found in a poem.
Next Post: Dear God, love me a little less