You are here: Home / Lessons / Challenging notions: what is cruel? 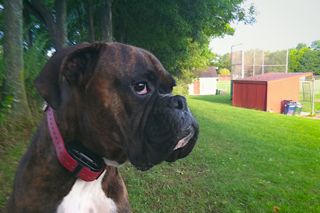 While walking in the park with Beck one morning, I stopped to speak to an elderly lady with two small dogs. “You didn’t crop the ears,” she said, referring to Beck’s floppy ears, and then pausing to lean on her cane.

“We chose not to,” I said, over her small barking terrier running circles around Beck.

I thought back to our previous cropped-eared Boxers. The breeders, Vi and Muriel, we bought Gunnar and Ruby from had encouraged cropping (surgically removing part of the ear to make them stand up) since they showed many of their dogs and that was the preferred breed standard at the time (1995). They had their experienced veterinarian perform the procedure on their puppies around 8 weeks old. So when we picked up Gunnar, and later Ruby, their ears had been cropped and were mostly healed.

Beck came from a different breeder who didn’t feel ear cropping was necessary. James and I both liked Beck’s large floppy ears, so we didn’t crop. While cropping ears (and docking tails) – also common in breeds like Dobermans and Great Danes – isn’t necessary, I always felt, that it was my choice.

What does cruel mean?

My handy, tattered Webster dictionary defines cruel (an adjective) as “deliberately causing suffering to others.”

I wondered: what other observations in life might I consider cruel?
Is shooting a dog tied up to a lamp post while filming it art? Or is it cruel?

Would piercing a baby’s ears before she can speak be considered cruel? Or is it a cultural thing?

What about sentencing a Saudi woman to 10 lashes because she drove a car in Saudi Arabia (which is not against the law)? Is that cruel?

How to castrate a lamb

Mike Rowe – the handsome rugged guy from Discovery Channel’s Dirty Jobs – had a job herding sheep. Castration was part of the required animal husbandry. Rowe usually does no research or prep before entering into a dirty job (he and his crew just go in and shoot unscripted). However, this castration requirement hit a bit too close to home for Rowe. He wanted to make sure that he knew what to expect about the humane way of castrating. So he called the Humane Society, Society for the Prevention of Cruelty in Animals (SPCA), and PETA, just for fun (because they don’t like castration.)

I won’t go into details, but Rowe admitted that his notion of the right way of doing something – castrating lambs – was wrong. (If you’re the least bit curious, Rowe gives a vivid description during a fascinating TED talk) During Rowe’s “discovery moment,” he began to question what else he may have been wrong about.

Excuse me, I’m having a Neo moment

When Neo in the movie The Matrix discovered that he was living in a computer program, he realized that everything he believed to be true was a lie. The moment of recognition that alters Neo’s behavior and sense of self is also a familiar concept in stories with plots.

Life is not simply a progression from point A to point B. It involves reversals that upset our best laid plans. There are many elements in ourselves and in the world around us that undermine our fate. Often we learn of some important piece through a moment of belated recognition.

Had I been wrong about ear cropping in the past, and only now fully realized it? If so, what else in life have I gotten wrong?

What have you discovered that led to a new realization?