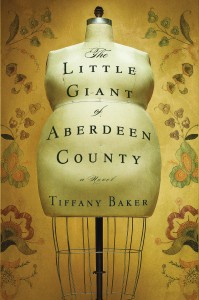 While creative and expressive, The Little Giant of Aberdeen County by Tiffany Baker lacks true magic.

Truly Plaice is the book’s lonely, plus-sized, central character. She was born with a condition that causes her to grow persistently faster than anyone else in her small town, thus making her the target for a lifetime of abandonment, insults and harassment.

In the beginning, the story melodramatically plods along. The love Truly has for her beautiful, self-absorbed sister who only wants to escape Truly and her small town life grows tiresome. Truly’s an estranged misfit, and not really all that endearing, yet the geeky Marcus falls for Truly and keeps his love for her alive even after he returns from Vietnam.

As the plot unfolds, some situations are almost too conveniently answered instead of allowing the characters to drive their destiny. For example, Serena Jane’s rape seems like an unsurprising, forced element to make sense of the latter part of the story.  No further exploration is given into any of the predominant character’s feelings. Likewise, there is ample foreshadowing of Bobbie Junior’s homosexuality, but no emotional insight into the character’s state of mind.

Between the lines, Amelia – Truly’s best friend – seems flat and underdeveloped. Truly’s inability to speak honestly with Amelia and her excessive anger toward this woman who was more like a sister to her than Serena Jane felt clumsy.

Ms. Baker infuses beautifully descriptive language throughout the first-person narrative that at times can be metaphorically extreme. However, the story is elevated in the second half when Truly discovers a long lost “shadow book” and begins to experiment with the herbal remedies she decodes.

Truly keeps more than a few intriguing recipes a secret from her friends, and makes choices that challenge her spirit. Intertwined in the narrative like an insidious vine is a thread of deceit that creates an emotional rift almost too large for even Truly to escape.

I would have liked to see more exploration and backstory on the herbal remedies and healing touch of Tabitha Dyerson. She was introduced in the first chapter as a healer and relative of a famous witch.

Although, I failed to find magic, the story does explore loneliness, love and death in a unique way.