You are here: Home / Lessons / Searching for Wonder Woman 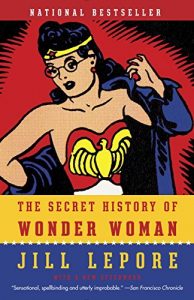 Where is Wonder Woman? Where is that beautiful, intelligent and powerful kinky boot-wearing Amazon who kindles–and then crushes men’s fantasies?

Historically, men have ruled as superheroes in pop culture, because the stories were written by men, for men, and continues in comic books  today.  Women have been mostly sidelined to represent love interests and damsels in distress–that is until the character of Wonder Woman first appeared in a comic book in December, 1941.

Wonder Woman took the comic world by storm as a fearless feminist icon steeped in mythology, but who valued honesty in the name of equality while living in America. And she brought cool swag from Paradise Island: an invisible jet, a lie-detecting whip, bullet-proof cuffs and a traffic-stopping star-spangled, curve-hugging, strapless body suit that barely contained her ample breasts. Wonder Woman (aka Diana Prince) was female royalty. If more women were like her, perhaps men would willingly follow–slaves to their desires.

She was the kind of woman a girl could really look up to.

I always liked Wonder Woman and was fascinated to listen to author and historian Jill Lepore speak with NPR’s Terri Gross about her book The Secret Life of Wonder Woman. During the interview, Lepore shared a tangle of secrets from the life of the most popular female comic book hero’s creator–a man named William Moulton Marston. Marston was a noted psychologist and inventor of the lie detector test. He lived an unconventional life that he kept a secret from the public eye–and the four children he fathered with his wife and live-in mistress.

Aside from Marston’s unconventional living arrangements, group sex parties, and affinity for using bondage as symbolism, his vision of Wonder Woman stemmed from his interest in the women’s suffrage movement! Also Margaret Sanger, the birth control and women’s rights activist happened to be the aunt of his mistress Olive Byrne. And Marston’s Wonder Woman was probably influenced by the two strong stereotype-defying women he lived with.

Prior to Wonder Woman, females weren’t considered as powerful as men, nor were they good enough role models because they were the “weaker sex.” But in 1941, as the war to end all wars waged on, comic books were considered too violent for children to read. Maxwell Charles Gaines, a pioneering figure in the creation of the modern comic book and head of American Comics felt public pressure to change the image of comics. He consulted with Marston who believed comics could be educational and pitched the idea of a female super hero who looked like a Varga girl–the erotic pinup girls of the 1940s–but was as strong as Superman.

What have we learned from Wonder Woman?

Over the years we’ve learned that women could lean in, overcome prejudice, and stand for something bigger than any one of us. Wonder Woman gave us hope that we could have it all when we finally grew up.

Although I wasn’t really into comic books, I had heard about Wonder Woman. When I first saw Lynda Carter play Wonder Woman on television in 1975, I knew there was hope for me. Carter brought to life the comic book heroine and literally kicked ass in her satin tights while fighting for truth and justice.

Where is Wonder Woman today?

Warner Brothers has apparently begun production on a Wonder Woman film starring Gal Gadot, which is slated for a 2017 release. But I’m not talking about a Hollywood actress who looks great in a body-hugging one piece.

The real Wonder Woman is our next door neighbor, our mother, our daughter, our sister, our friend.

I think every woman is Wonder Woman. Here are ten women from Rochester who have over the years shared their stories of bravery, vulnerability, success, and courage with me.

1. My mom–Conchita Linda Santiago Argento–faced breast cancer with courage and strength nearly three years ago. Throughout my life, I’ve learned many valuable lessons from her including take charge of your health, ask for help and be supportive. Today, she is a breast cancer survivor.

2. Susan Roberts former executive vice president and chief compliance officer for Bausch + Lomb says that faith, family, and friends are guiding principles that have helped shape her into the woman she is today. I’m blessed to be counted among her many friends.

3. Karen LaFauci built her successful copywriting business on trust, integrity, honesty and communication––with the whole-hearted support of her family.

4. Betty Perkins-Carpenter, Ph.d., is a fitness expert, former Olympic diving coach, author and U.S. Air Force veteran. This 84 year-old great grandmother has spent most of her life researching and developing her unique Six-Step Balance System, which has helped thousands of people improve their balance and reduce falls and injuries.

6. Shira May exudes grace and gratitude balancing motherhood with a new catering business and making an impact in the gay community. She shared her poignant story (now on YouTube) during the inaugural Listen to Your Mother 2015 event in Rochester.

7. Katie Riley finds that being a mom while maintaining a career in nonprofit advancement is simultaneously humbling and energizing.

8. Hadley Matarazzo loves what she does as a personal injury attorney who stands up for people and protects their rights. She also loves her family and credits her husband for being the primary caregiver and running the household.

9. Tokeya Graham not only molds and challenges young minds as a college English professor, but also pushes herself to be a force for change. She founded Charity ROCs a small community organization that gathers materials and resources to help those in need, and she’s also an author and poet.

Do you know a Wonder Woman?